The Moroccan Jewish musician Isaac Loeb[1] recorded no more than a handful of records and perhaps only the soul-nourishing one featured here: “Belouajeb Nefrah” (بالواجب نفرح, We must rejoice), a duet with Slomo Souiri––complete with hand-clapping. Even if his recording output was scant, Loeb, a disciple of Rabbi David Bouzaglo, was certainly revered. This was as true in Casablanca, where this disc was made for the Olympia label sometime in the 1950s, as it was in Montreal, where he settled in the mid- to late-1960s and where he served as an important member of Maghen David.[2] 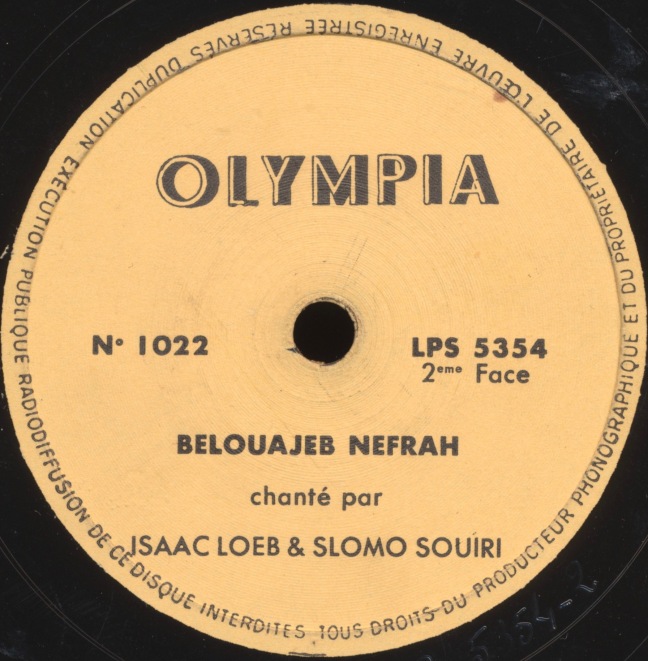 [1] As legend has it, three Loeb brothers, Ashkenazim originally from the Alsace region, settled in Morocco in the eighteenth century. The three were forced to settle in three different cities: Essaouira, Safi, and Azemmour.

[2] Maghen David was founded in 1968. It was one of the first Moroccan synagogues established in Montreal.

Salomon Souiri was born in Morocco (possibly Essaouira, as his family name indicates) in the early part of the twentieth century. Like other Moroccan musicians, including Samy Elmaghribi and Salim Azra, he would eventually find himself in Montreal.

Souiri was a prolific recording artist and one of the great countertenors (if not, in fact, a vocalist of an even higher range). By the 1920s, he was already recording for the Pathé label under the names “Chloumou” and “Cheloumou” Souiri. In the 1930s, he added Baidaphon and Columbia to his roster. As for the latter, the label claimed that the public “could not remain indifferent” to Souiri’s popular repertoire, to which they may have been referring to malhun ––  an Andalusian-related genre whose song texts are of a slightly later vintage and written in Arabic dialect.

By the 1950s, when he recorded “Kssidat Farha” –– part of the malhun repertoire –– Souiri had relocated to Casablanca. The latest spelling of his name –– “Slomo” –– reflects a certain fidelity to the Jewish variant of Moroccan Arabic. Backed by a small orchestra of violin and percussion, a chorus joins Souiri throughout “Kssidat Farha,” the lyrics of which are based on an eighteenth century poem originally written by the Moroccan Cheikh Elmaghraoui. Where exactly this recording was made is unknown but something makes me think it may have been in a synagogue. Whatever the case, Souiri’s version of “Kssidat Farha” is among the most moving records in my collection.

The Olympia label, run by a certain Mr. Azoulay-Elmaleh, was one of a number of small, Jewish-owned recording outfits that appeared in mid-century Morocco. It may be the case that Olympia’s records were pressed by the Philips company, although I cannot be for certain. As for the history of the label, I can only gesture. To be sure, Olympia had a short lifespan –– emerging in the final years of the 78 rpm era, only to disappear soon after. Nonetheless, Olympia recorded an impressive range of Casablanca-based Jewish artists, including those who not only sang in Arabic but so too Hebrew from the paraliturgical tradition.