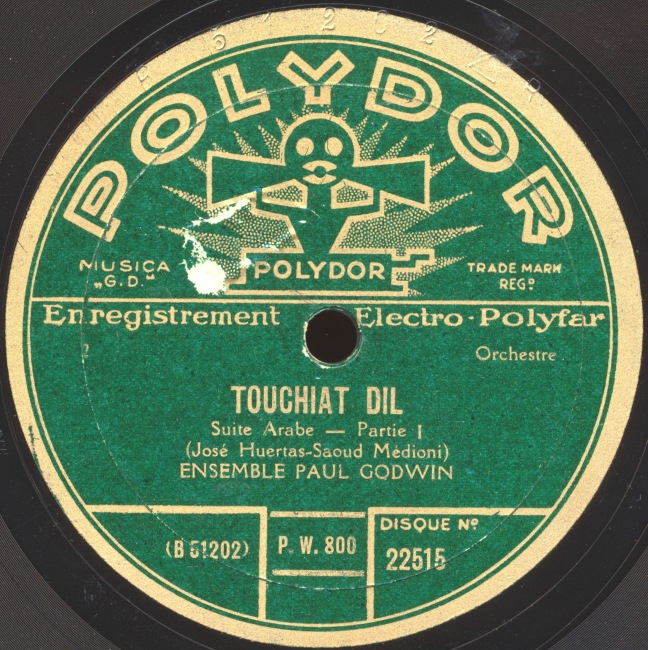 Paul Godwin (né Pinchas Goldfein) and Saoud l’Oranais (né Médioni) are not names you might expect to find together on a record. But once again a disc made almost a century ago has managed to surprise and delight. Let us start with a bit of biography. The Polish Jewish violinist and composer Pinchas Goldfein was born in 1902 in Sosnowiec in Congress Poland.[1] His talent for music was recognized while he was still a boy and brought him to study in Vienna, Budapest, and eventually in Berlin, where he settled in the 1920s. In Berlin, he established a dance band and made a name for himself as an artist fluent in the various popular styles of the day. While his first dance records were made under his family name––“Tanz-Orchester Goldfein” (the Goldfein Dance Orchestra)––he soon settled on the stage name of Paul Godwin. By 1928, his more than 1500 recordings of foxtrot, tango, and jazz made Godwin perhaps the best selling artist of his time. For a sense of scale, Lloica Czackis has suggested that the Grammophon label had sold some 9 million of Godwin’s records by 1933.[2]

How Godwin connected to “Touchiat Dil,” (tushiyyat dil), a metered, instrumental overture in the mode of “dil” and a component of the Algerian Andalusian repertoire, is not entirely clear but the credited names at the center of this record begin to offer some clues. At the end of the 19th century and continuing through the 20th century, European composers in Algeria embarked on a number of projects to transcribe and “modernize” Andalusian music in an attempt to render it, “classical.”[3] While Jules Rouanet was perhaps the most famous of these figures, owing to his partnership with the Algerian Jewish recording pioneer Edmond Nathan Yafil, the Oran-born José Huertas was well known in his time as well. Like Rouanet, Huertas’ compositions were indebted to a celebrated Algerian Jewish musician, in his case, Saoud l’Oranais (né Messaoud Médioni).[4] Owing to Médioni’s labor, Huertas went on to publish and register the copyright for a number of Andalusian pieces or those associated with the tradition, including the famed qasida, “Bensoussan,” which tells the true and tragic story of a Jewish-Catholic romance in late 19th century Algeria. Given that Huertas’ compositions were distributed by the French music publisher Senart and that he was a member of the French rights society SACEM (Société des auteurs, compositeurs et éditeurs de musique), the potential for Godwin to be paired with “Touchiat Dil” starts to reveal itself. And while Godwin’s 1929 Polydor recording is a departure from his standard fare at the time and certainty from whatever Saoud l’Oranais must have initially played for Huertas, the Polish Jewish violinist nonetheless gives an evocative performance which manages to capture at least an echo of the original.