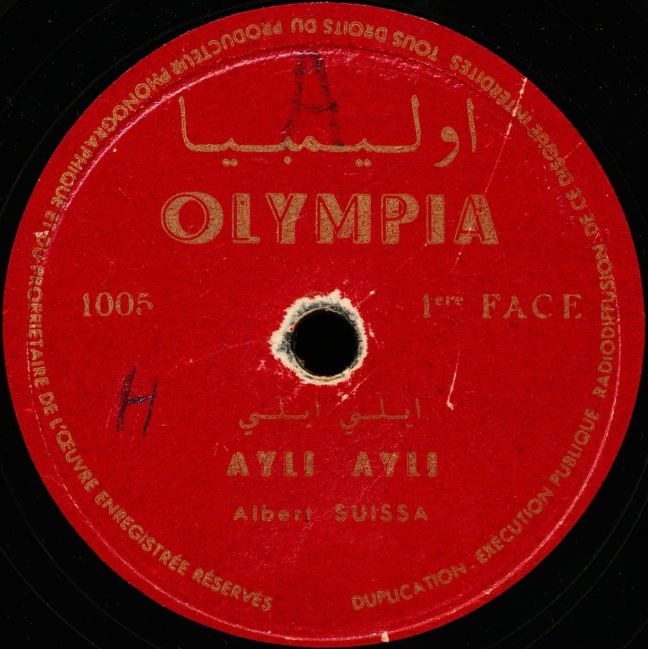 On January 14, 1954, a confidential letter was passed on to the French Civil Controller of Morocco’s southern Chaouia region by a subordinate. It noted that a certain qaʾid (tribal governor) by the name of “Saghir” had brought it to his attention that a number of records recently played on Radio Maroc had “made allusion to the exile of the ex-sultan.”[1] Given the political climate, this was a particularly grave problem. Months earlier, in a dramatic showdown, the French Residency, in cooperation with the Glaoui Pasha, had removed Sultan Mohamed ben Youssef from the throne and cast him into exile. The shortsighted move had once again brought Moroccans together. Tensions across the country ran high. The march to independence was gathering steam.

While at least three offending discs making “allusion to the exile of the ex-sultan” had made their way onto Moroccan radio, one seemed to merit special attention. Perhaps it was because it was so catchy. At some point, the qaʾid must have hummed a line to a bureaucrat in the Civil Controller’s office. It was transcribed as “El habib diali fain houa” (my friend where is he). The song in question was known variously at the time as “Ayli Ayli,” “Hbibi diyali,” and “Sidi Hbibi.” Today, it has been covered by just about everyone: from Moroccan R&B and funk artist Vigon to French-Spanish singer Manu Chao.

By February 1955, Saghir’s intelligence tip had worked its way up the ladder. Political Affairs, for example, now possessed a summary of the original letter, as well as new information gleaned along the way. On February 15, 1955, it was concluded that at least three versions of “Hbibi diyali” by three different artists were being distributed in Morocco. The record censor’s office determined the following: “that of Albert Suissa contains political allusions.” On February 23 1955, the Moroccan Jewish artist was brought to the attention of Captain Levaique, Director of General Information Services. He was informed that if he wanted to intercede with Suissa’s “Ayli Ayli,” released on the Olympia label and bearing issue numbers 1005 and 1006, he would need to act quickly. Indeed, Mr. Azoulay-Elmaleh, who ran the Olympia label out of his brick and mortar store on Rue de Mazagan in Casablanca, wrote to Captain Levaique that he had official authorization to distribute the Suissa records. Furthermore, he added that 935 copies of “Ayli Ayli,” pressed by the Radium label in Paris, were to arrive at port in the coming days. As for what happened next, the archives go completely silent.

Whatever the fate of those discs was in February 1955, we can presume that Suissa’s record traveled widely and was widely popular (despite what seems like a slight tape problem on the recording). Originally released at the end of 1954, Azoulay-Elmaleh, operator of a small, independent Moroccan record label, had ordered another thousand copies of “Ayli Ayli” just months after it first hit the market. We have heard from Suissa before on this site but have not yet thought of him in nationalist terms. On “Ayli Ayli,” we hear him asking “my love, where is he?” in the shadow of the disappearance of the beloved Sultan Mohamed ben Youssef. Over the next two years, Suissa’s support for the monarch would grow more strident.[2] The same was true for any number of Jewish musicians who remained in Morocco through the earliest years of decolonization.

[1] Christopher Silver, “Listening to the Past: Music as a Source for the Study of North African Jews,” solicited contribution to “Jews of Morocco and the Maghreb: History and Historiography,” ed., Aomar Boum, Jessica Marglin, Khalid Ben-Srhir, and Mohammed Kenbib, special issue of Hespéris-Tamuda, vol. L1, 2016, 244. (https://www.academia.edu/36013037/Listening_to_the_Past_Music_as_a_Source_for_the_Study_of_North_African_Jews).