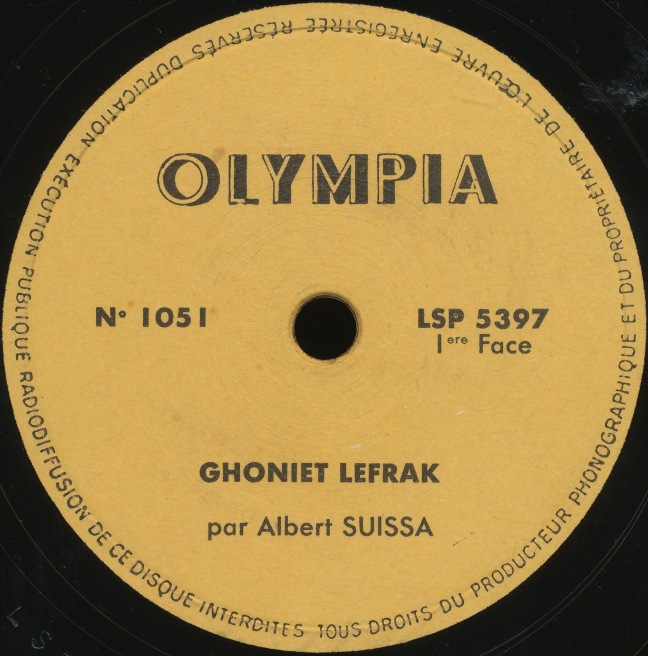 This entry on Albert Suissa was born of a misunderstanding. Or perhaps, better yet, serendipity deserves the credit for what follows. Either way, consider this an attempt (or two) at the biography of a prolific Moroccan musician who lived in-between and who embodied “lefrak” (in Arabic, “separation”).[1] I will explain more below.

Born in interwar Casablanca, Morocco, likely in the early 1930s, Suissa became a known musician in his hometown by mid-century. His base––in almost all senses––was the mellah, the Jewish quarter. Not only did Suissa call that area home, specifically, the Rue Bab Marrakech, one of two contact addresses he provided in a c. 1950s songbook, but he also performed at venues there like Salim Halali’s Le Coq d’Or as the scant photographic evidence makes clear. In addition, his fan base was certainly drawn from the popular Jewish quarter but that he had Muslim admirers as well is without doubt. In fact, as I have discovered in various archives, his music was already broadcast on Radio Maroc in the mid-1950s and at least one of his records even raised the ire of the civil controller for its popularity and potentially subversive message (more on this in a future post).

Albert Suissa, who played ‘ud and sang, was a talented lyricist and composer. While it was not his own composition that would enrage the French just before the end of their protectorate there, his other works certainly raised eyebrows. During the tail-end of the 78 rpm record era, for example, Suissa recorded at least one double-sided disc in honor of Sultan Muhammad V. Later, as he sang of matters topical and in styles popular (chaabi or shaʿbi) on records pressed to vinyl, he would gain the attention of both his devotés and his detractors. In the broadest of brushstrokes, then, we have moved toward one history of Albert Suissa’s early career.

In June 2017, the affable and indefatigable Simon Skira, Secretary-General of the Federation of Moroccan Jews in France, reached out to me with a simple and reasonable request. Skira asked me if I could supply him with a transfer of Albert Suissa’s version of “El Frak” (“Separation”), a classic of Moroccan song performed by many who recorded to shellac. But it was Suissa’s version that was particularly meaningful to Skira. Indeed, the most well-known of the few photos of Albert Suissa on the web comes from Skira’s personal archive. In 1957, in honor of Skira’s fifth birthday, his parents hired Suissa and his orchestra to perform for a full week at their Fez home. At some point during those seven days in 1957, someone snapped a photo and captured Suissa performing with a very young Skira by his side. That photo is now posted to nearly every Moroccan Jewish message board across the internet.

Here is where the confusion began. Albert Suissa, of course, did record “El Frak” on 78 rpm (I will eventually add to Gharamophone) but he also recorded a song entitled, “Ghoniet Lefrak” (“The Song of Lefrak”).[2] By elision, I had grabbed the latter, transferred both sides, and sent his way. In some ways, this mistake points us toward two phenomena. The first is how confusing writing about historical recordings can sometimes be––especially when song titles employ a number of words in heavy rotation (“Lefrak”/“El Frak” is but one example). But the second phenomenon made evident by my error revealed once again the prodigious nature of Suissa’s output. Because Suissa had literally recorded dozens of records on a number of different labels while in Morocco, it took some time to find what I thought was “El Frak” on my shelf. And in the end, I was seduced by the wrong “separation.”

Enter serendipity. “Ghoniet Lefrak” typifies Moroccan popular music at mid-century. With an istikhbar (improvisation) on violin at the outset, it seems to borrow heavily from al-ala (an umbrella term for Moroccan Andalusian music) toward the beginning before transitioning to Suissa’s crisp vocals and an ever-accelerating rhythm. Suissa’s invocation of the word sabar (meaning, “patience”––but also intimating a longing for), conveyed mellismatically at moments, cleaves the listener to a certain emotional ecstasy.

Let us return now to Suissa’s biography––for it is far from complete. To fill in the details, we turn to Shira Ohayan, the Education Director for the Jerusalem East and West Orchestra, and the first to chart Suissa’s path. Melomane and activist, Ohayan has conducted invaluable on-the-ground interviews with North African musicians and their descendents in Israel in recent years in order to reconstruct the lives and preserve the legacies of artists at risk of fading into oblivion. For information on Suissa, Ohayan interviewed his family as well as members of the Karoutchi musical dynasty. Her history of Suissa, then, starts with the Moroccan musician at mid-century but quickly shifts to Israel. According to her research, it seems Suissa may have made his way to Jerusalem sometime in the early 1950s––at the very moment that he would have first began recording in Morocco for the Olympia and N. Sabbah labels. In Israel, as Ohayan has chronicled, Suissa made his living performing at wedding and family celebrations, much as he did in Morocco, while at the same time, recording with the Azoulay brothers through their Koliphone and Zakiphon imprints. As Ohayan makes clear, Suissa never stopped producing music. He continued to compose at an enviable and rapid clip. Nearly the entirety of the generation of Moroccan singers who came of age in Israel in the third quarter of the twentieth century––like Raymonde, for example––employed Suissa’s words and music at some point in their career.

That Albert Suissa’s biography and history have until now escaped is not surprising. In many ways, he lived in-between and embodied the painful essence of “lefrak” (“separation”). To begin with, he moved between Morocco and Israel at the very moment that such a back and forth migration has long been thought of as an impossibility. This constant displacement has meant that his presence in either place has long been difficult to grasp. It should also be recalled that Suissa began his career at the very moment that the shellac era faded into the vinyl age. This has meant that he left a trail of 78s across the Mediterranean just as that medium became obsolete.

And yet thanks to Ohayan and others, we are beginning to pick up the pieces and the discs themselves. As more Albert Suissa records are posted to Gharamophone, I will do my best expand upon his biography.

[1] “Lefrak” or “El Frak” is the French transliteration of the Arabic “al-frāq.”

[2] As Ethnomusicologist Ruth F. Davis has shown in relation to Tunisian music, “Ghoniet,” also spelled, “ughniyya,” “designate[s] a type of song, usually in colloquial Arabic, with a strophic structure” (Davis, “Jews, Women and the Power to be Heard: Charting the Early Tunisian Ughiyya to the Present Day,” p. 188, Music and the Play of Power in the Middle East, North Africa and Central Asia, ed. Laudan Nooshin, Routledge, 2009). That “Ghoniet” / “ughniyya” portends to a popular quality and is true for the Moroccan and Algerian contexts as well.